On tent and magnetfestival inspired installation

The tent, primordial reality of each (open air) festival was the weekend of Sept 9 - 11 the starting point for the design of an installation on the Magnet Festival. A tent-like structure of poles, curved blades and guy ropes was the bearer of a transparent organic, rhythmic / musical structure. Three sections of the installantion entered into a visual relationship. This made a spectacle of complex curved lines and surfaces visible what increasingly varied depending on the position which took the audience. The installation did fit in well into the vibrant energy of the festival.
A series of photos of the installation can be seen here or under the menu item: Three dimensional work 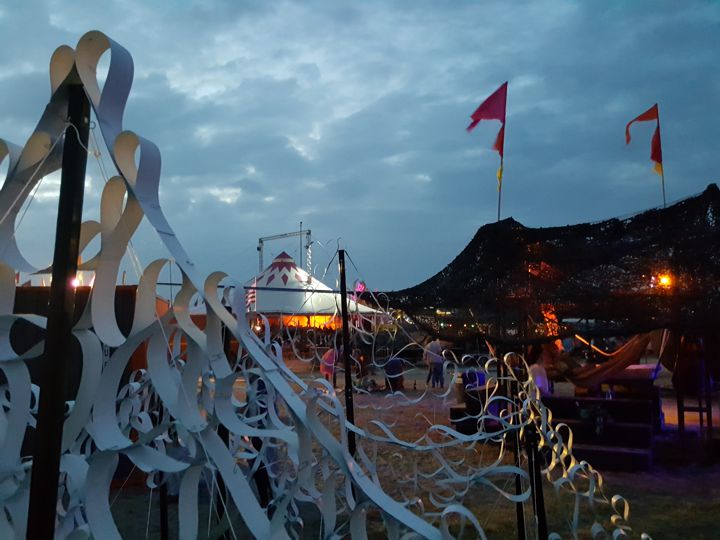 Graphic play with lines in installation in the Rembrandtpark 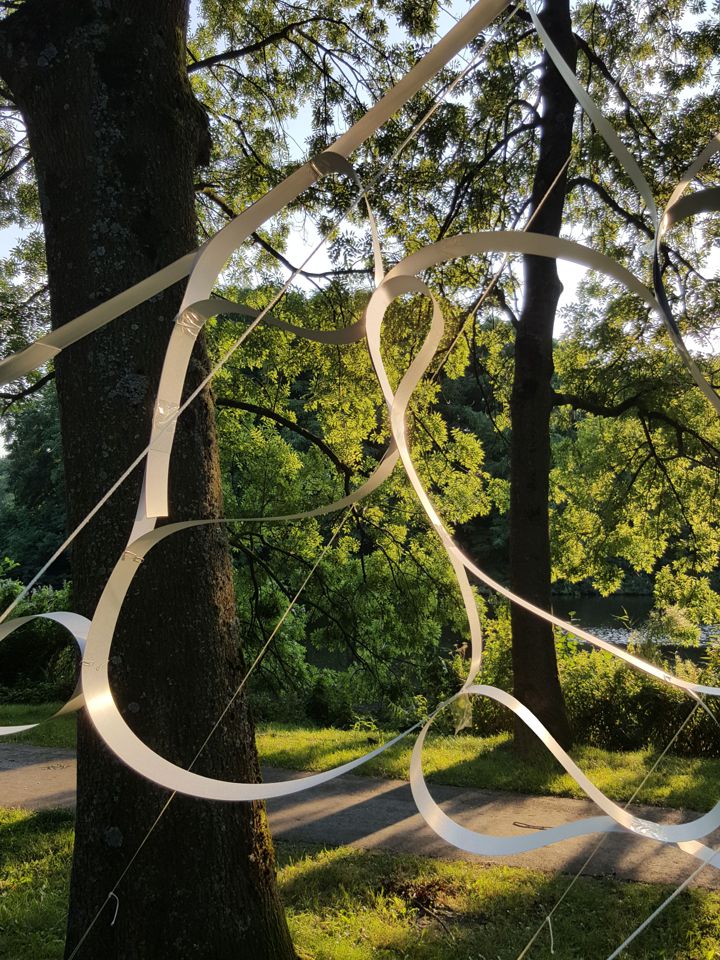 The Rembrandt park was on Saturday Aug 27 the location for a new image. The idea for this came when I recently, around six o'clock at the beginning of the evening, cycled through the Rembrandtpark.
My eye was struck by a place which transformed from an ordinary place, in the eveninglight, to a very special location. You can see something back from this in the picture below. 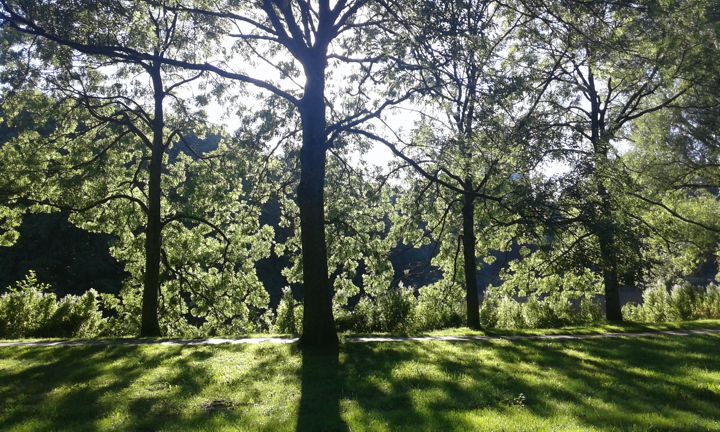 I looked into the sun. The trunk and branches of the trees stood out like silhouettes. The leaves were drawn in the plane in a certain way, and the whole became a kind of decor with an exceptionally beautiful 'lighting'. Behind these trees there is a waterpool and runs an forest edge. This causes the middle part of the image is outlined against the darkness. In addition, the sky at the upper part outlines everything there against the light.

play with lines.
Idea was now to organize a stimulating play for the imagination with the lines of fins and the trees in a organic/dynamic way  so that the graphical qualities of both would merge.
To achieve this, we have built an installation in which the slats are above the ground. The construction which was necessary for this is derived from tent-constuctions.Tent-structures are eminently temporary and mobile. With a minimum of resources it is possible to built large structures that have a (relatively) large capacity
The construction here consists of three uprights of two black piles (entirely made with blades) topped by an arc accentuated with gold paint. 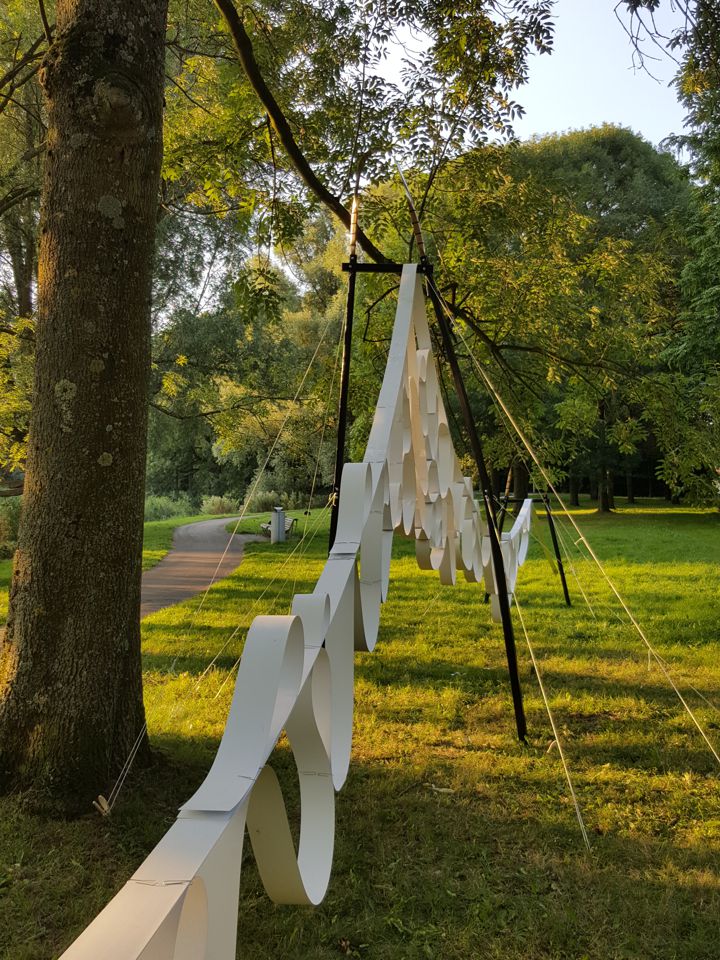 Black and gold concerns in this work for a content deepening level.
Between these poles is a line (slat) connected and on this, mainly under but also above,  is an organic/dynamic structure attached  where you can look through. Behind it are the trunks, branches and leaves.

Piles of the construction, tree trunks and branches sign off black graphical. The slats sign off (more or less) white graphical.
More photos of the installation can be seen here or under the menu item 'Three dimensional work'
The virtual reality file will follow later on this site

Thanks.
For the realization of this work I am assisted by Ruslan Eliseev in a pleasant way. I want to thank him warmly for his creative contribution and critical evaluation of the image.
Also thanks to the cycling and walking public, which passed by, for all there (positive) reactions.

Sunday, July 3rd an installation has been build in Spaarndammerplantsoen. This park is surrounded by residential blocks belonging to the so-called Amsterdam School. In this expressive architecture, there is a wealth of forms which are arranged in a playful way. Wavy organic elements here are richly represented and contribute significantly to the expression.
The installation build in this park relates to this architecture but without being architecture itself. 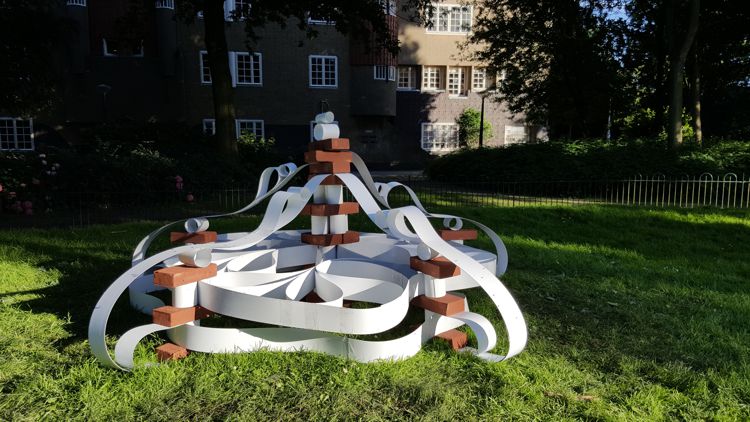 Idea is that in an installation which is responsive to the Amsterdam School the use of bricks is a logical thing. The inventive use of bricks is in fact an important feature of this movement. Question was how bricks here could be used constructively in combination with the vertical blinds. The easy way would be that the supporting columns would consist of only bricks but there is chosen for another solution.  The bricks are stacked by placing cylinders of vertical blinds between them.

The cylinders are the accretive points for the horizontal blinds of the shell. In this way height is gained rapidly with a minimum of heavy bricks. The blinds turned into cylindrical shapes can easily carry heavy bricks. In this way the bricks are playful incorporated into the light blinds structure. It also creates a visually appealing rhythm of brick / cylinder / brick / cylinder etc.
In the central column, this method is continued in quadruplicate. (Four cylinders and two brick), which results in a sturdy stable middle column. The stones are turned in different ways which support the overall dynamics of the flowing organic shapes in the installation. On top of the outer columns, the whole is rounded off with a tilted cylinder that is still present as constructive element. This is then continued in a rhythmic way as a decorative element and adds to the playful nature of the installation. The middle column ends on a sculptural way in which the use of stone and (empty)cylinders comes to a peak.

Inside, the installation is mounted a horizontal layer in which so-called paisley shapes 'move' in different directions and create an dynamic appearance

The columns to the side are also used, in addition as a point of attachment for the horizontal structure, for the construction of a vertical structure. This consists of lamellas, which first point away from the installation , then flip over  and walk back up to the middle column. At approximately half way here are added so-called paisly forms of different sizes which are also used in the horizontal layer inside

The whole creates a wonderful structure that harmoniously is inserted in the area  particular because of  the use of red bricks and white blinds which fit in well with the colors of the surrounding architecture and the green grass.

Starting today (Friday, June 17th, 2016) the installation made between the trees at Minervalaan is available in Virtual Reality.
The installation for this purpose  is recorded by the new Samsung Gear 360 VR Camera which came on the market on june ten. This camera has two so-called fish-eye lenses
that can record 180 degrees. Together is thus achieved a spherical image of 360 degrees. This image can be played in a Samsung VR headset after it is downloaded
from this site on your phone. 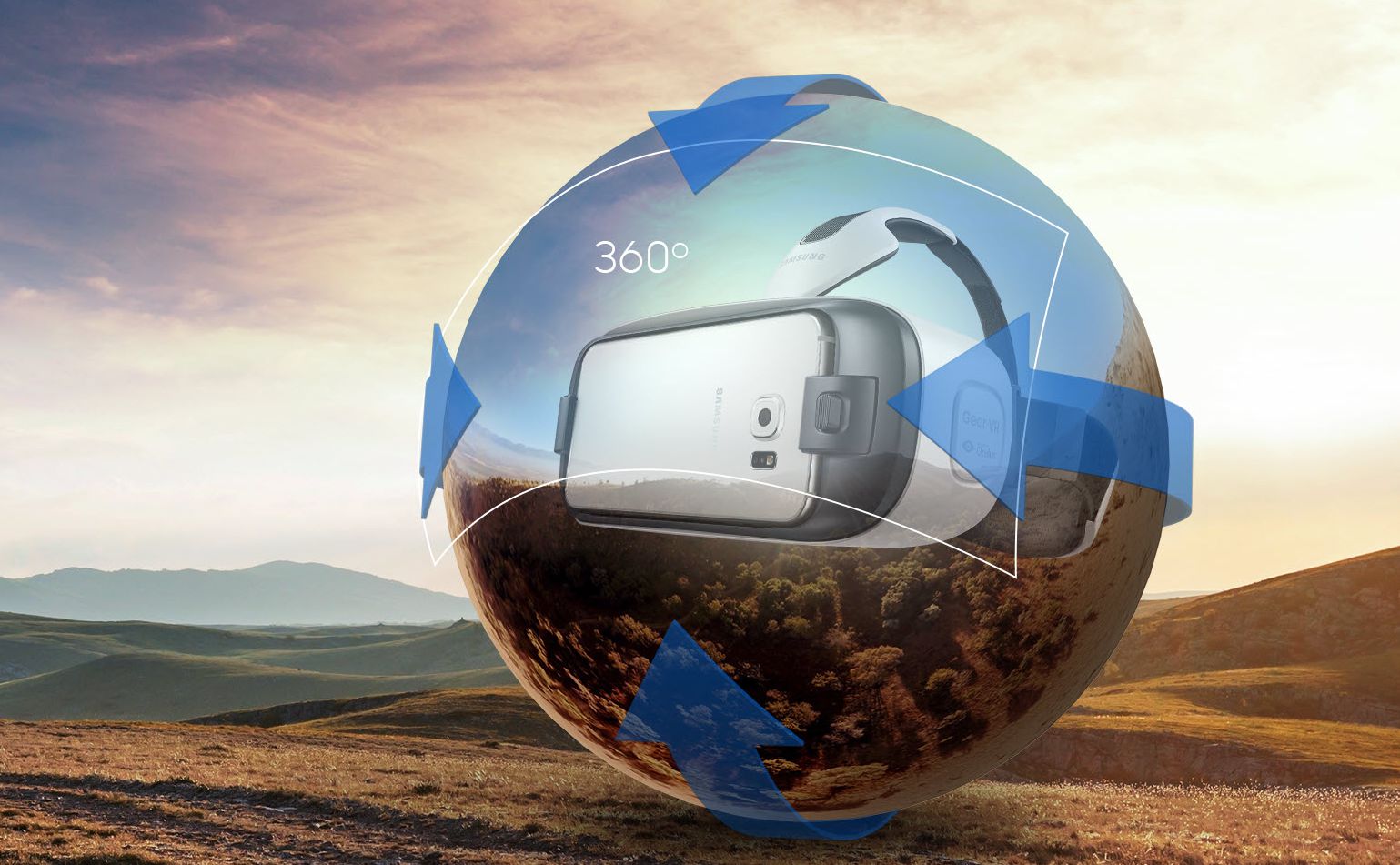 For me this is an ideal way to show he installations. This VR experience is permanently and continuously available in contrast to the installation itself which is
highly volatile.

Of course it is necessary to be in possession of a VR headset. I assume that anyone who is heavily involved in image-creating has such glasses in thedistant future.
The possibilities for artists, designers, architects etc. are gigantic.  Or VR will break through to a wider audience is the question which will be answered in the future.
You can find the file under the menu-item : three dimensional work or click here.

In the future the files can be also viewed directly in the internet browser that is provided in the VR headset. The download to your phone is no longer needed then.
At this moment the quality of these images is still too bad. When this has improved a post will follow on this site.

figure lying down between trees at the Minerva laan

On Sunday, June 12th, I and assistant Ruslan Eliseev created a pop-up image among the trees on the Minervalaan.It was in fact a figurative image. In the winding slightly chaotic shapes there is a recognizable human figure. This figure is in the so-called prostration posture: sprawled stretched out on the ground, face down and arms stretched forward. This attitude expresses surrender and is practiced in various spiritual traditions. 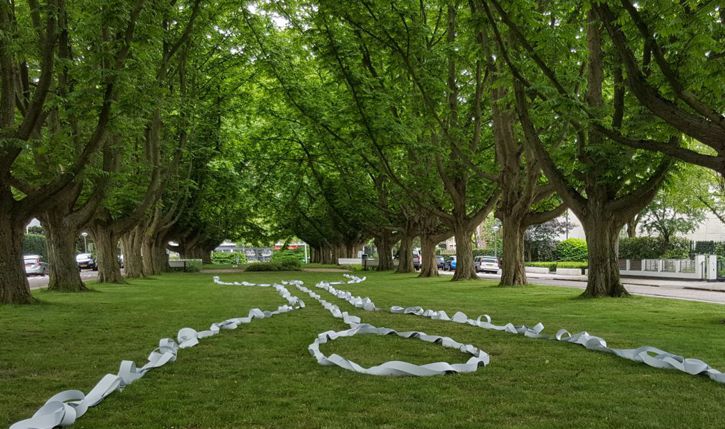 For two reasons it seemed to me a good idea to precisely put this figure here. First of all, this place evokes associations with a church/cathedral of trees. The trunks of these trees are splitting relatively low above the ground in curved branches which grow very vertical and exuberant upwards. So the trees form a canopy of leaves and under this roof a very special high space.

Reason two is that how perspective works is very visible on this place. The trees in the two rows are getting smaller towards the end. So does the lawn too. A long elongated figure consisting of lines could benefit and respond optimally to this phenomenon. Challenge was to lay the figure in such a way that a powerful image and virtual reality experience is the result. Photo and VR are after all the legacy of this fleeting pop-up image.

The figure Echoes the symmetry of the design of the environment. The curved branches get back in the limbs. In this way the image is harmoniously inserted in the surrounding area. The strictly geometrically symmetric structure is mitigated and compensated by the free form game in the lines. The use of the blinds material in a figurative way leads through the nature of the material (tightly geometric, smooth and flawless white) very easy to highly idealized forms and figures. By introducing a kind of chaos, by freely braiding the lamellae around each other, has been tried to get a counterbalance. On the one hand, viewed at a distance, there is a fusion of form to a few powerful light chaotic lines on the other hand is close, for who walks alongside the image, an order to be seen in many surprising shapes. This game of forms provided by the material, could be directed toward shapes that resemble human anatomy. With the necessary imagination associations can be made with knuckles, muscles, tendons, and bones. At other places associations can be made with people / animals who flatter each other.
Free use of the organic form leads easily to figurative associations. The linguistic/figurative aspect naturally arises out of the organic form.

More pictures of this work can be seen here at 'location Minervalaan'.